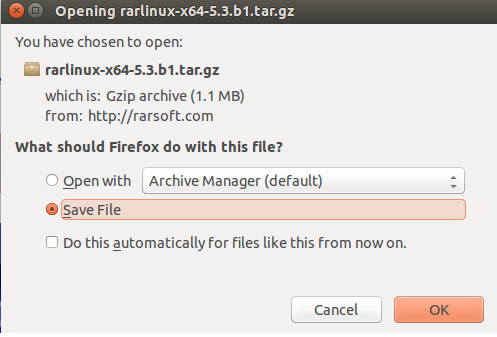 RAR (Roshal ARchive) is a well known file archive format, widely used on almost all popular operating systems. As compared to other zip compression utilities, RAR is better because it provides higher compression ratio, faster speed and ease of use. It can support multi volume achieves and is widely used for both simple and complex compression tasks. It was founded by Alexander Roshal, and has been under constant development. It has a very strong compression algorithm which is already being used by many modern day file achiever applications like 7-zip, WinZip, etc. Recently, RAR 5.30 beta 1 has been made available for download and testing. Let’s see what are new features in this release and how to install it on Linux operating system.

RAR is already a feature rich application, works flawlessly and consumes minimal system resources. It is well optimized, secure, well structured application, Although new release has more features for Windows version of RAR, i.e. WinRAR, however, the latest releases contains some noteworthy features for Linux as well, some of them are  listed below:

Disclaimer:  This is beta release of the software, so it is strongly encouraged to NOT install it on Production systems, as beta release can have unknown bugs/issues.

In order to try this new beta release, first of all download it for Linux operating system from following URL.

Now go into the extracted directory.

Here run following command to rename your already installed rar binary (If you haven’t installed any version of rar on your sytem, you can ignore this step) .

That’s it, run following command on your terminal to see the new RAR version in action.

RAR is an excellent command line utility for your Linux system, it is a must-have app as you need to perform compression and extraction operations on files on daily basis. Test out the new version and please report any bugs, so that they may be resolved and upcoming stable release will become more mature this way.

3 thoughts on “Command Line Archive Manager RAR 5.30 beta is out now. Install it on Linux”