Hi All, In this post, we are going to show you that how we can install Kali Tools in Ubuntu or CentOS 7 servers. Kali Linux is a distribution that is mainly used for advanced penetration testing. Kali Linux comprises of at least 300 testing tools. So, If you’re looking to get some of the power of Kali Linux, but you don’t want to go to the trouble of doing a full distribution install, then you can do so by installing its required tools on your Ubuntu or CentOS server.

The only requirements to install and use Katoolin for Kali Linux Tools is that we should have an updated Ubuntu 16 or CentOS 7 operating system, Python 2.7 and git package should be installed as well. If you missing these packages on your system then you can install by using below commands. 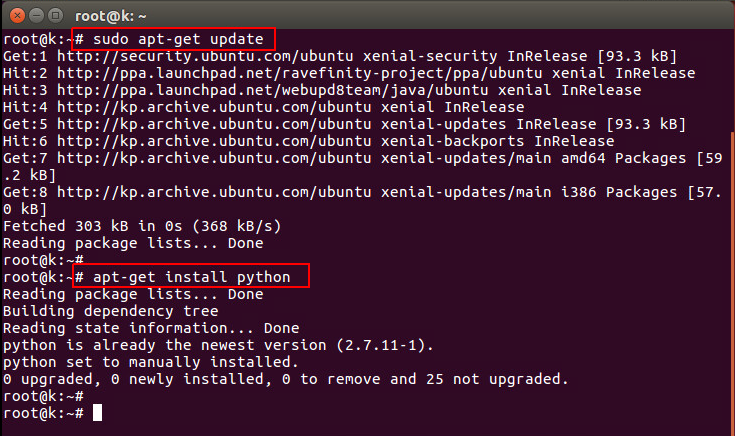 The installation of Katoolin is simple, just run the following commands to install it on your Ubuntu or CentOS 7 server.

Give the executable permissions to the script.

You can also download katoolin using the following ‘wget’ command and then extract the package.

Change directory into ‘katolin-master’ directory and give proper permission to ‘katoolin.py’ and then run katoolin and start adding the repositories, update, and pick the tools of your choice.

After installation, you can open and run Katoolin with ‘katoolin’ command, the output will shows the interface of Katoolin when you run the command as shown below. 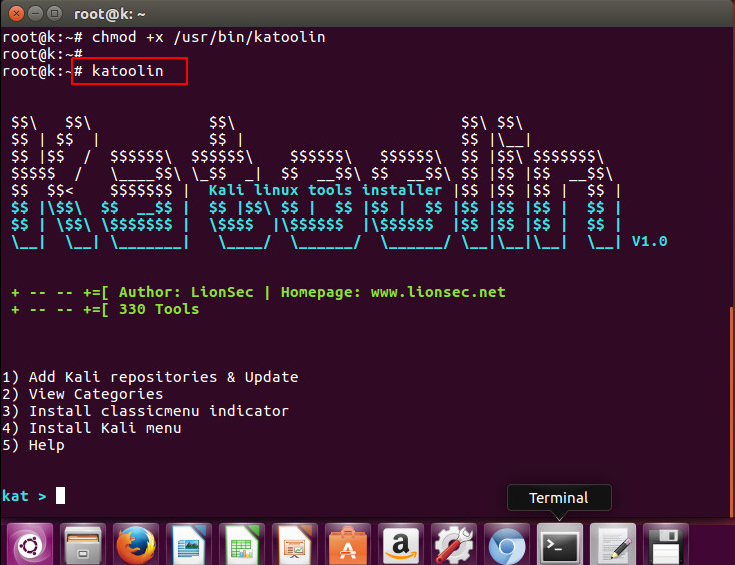 Once you have katoolin interface installed and opened, the first thing you must do is to install the repositories by tapping the 1 key on your keyboard and then hitting the [Enter] key. 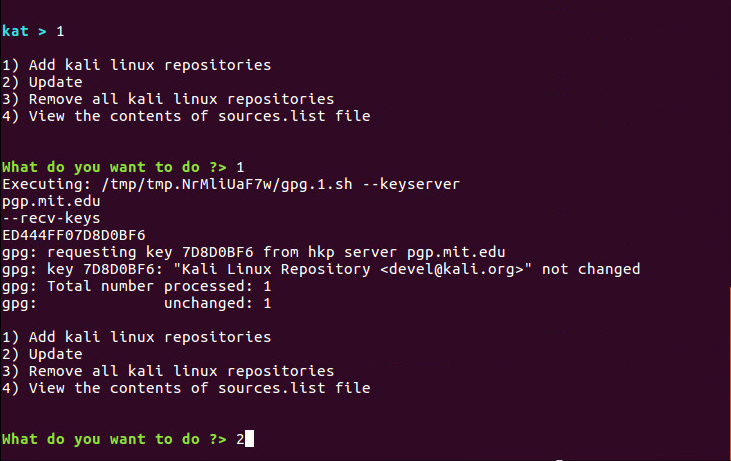 Then choose the next option; update your system repositories. 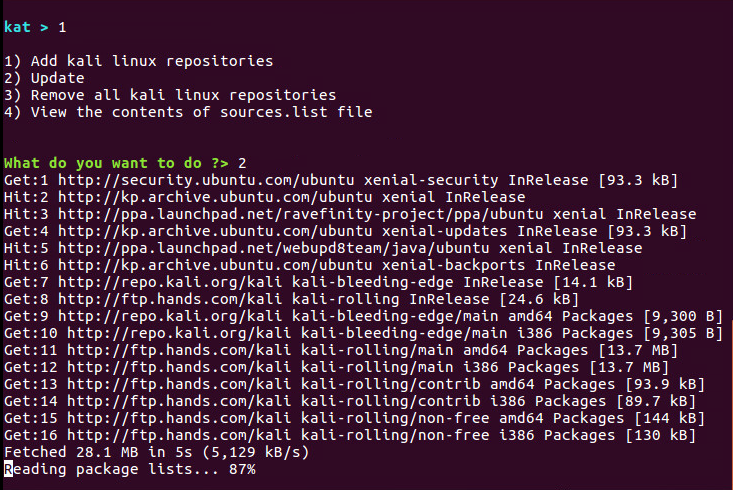 Once the repositories are added, you can view the categories of available software and install anything you like after typing ‘back’ to go back to the previous menu. 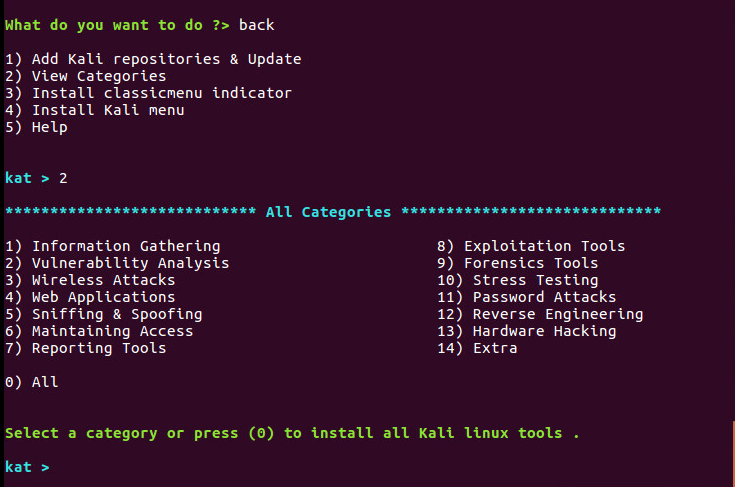 When you go to View Categories and then enter 0 for all, the installer will immediately return to where you were. Scroll up, and you’ll see that a number of the packages can’t be found. Those packages are no longer maintained or have been removed from the Kali repositories. Even with this issue, you’ll still find a alot of the Kali software available for installation.

So, the best option is to install kali tools step wise. Just like if you want to install Forensic tools on your system, then choose its option from the category and then type ‘0’ to install all forensics tools. 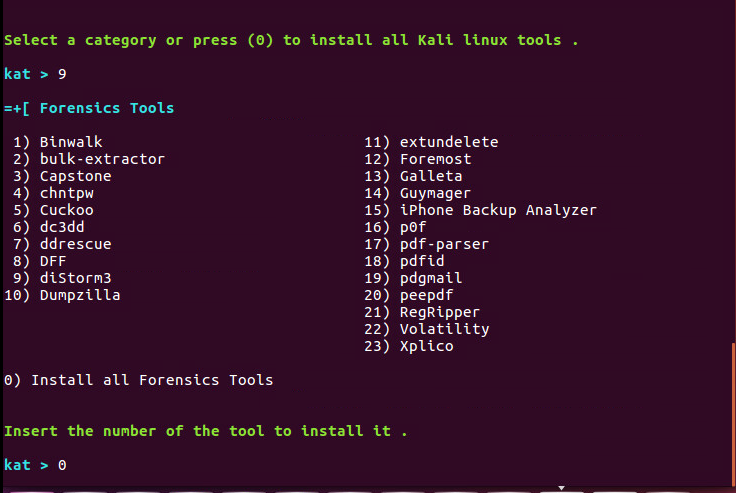 If you wish to go back to the the main menu, the type ‘gohome’ in your katoolin interface. Now select the option ‘3’ or 4 to install the menu, as we are going to choose option 3 for the classic menu installation for our Ubuntu Gnome Desktop. Press the ‘y’ key to continue and then hit ‘Enter’ to start its setup. 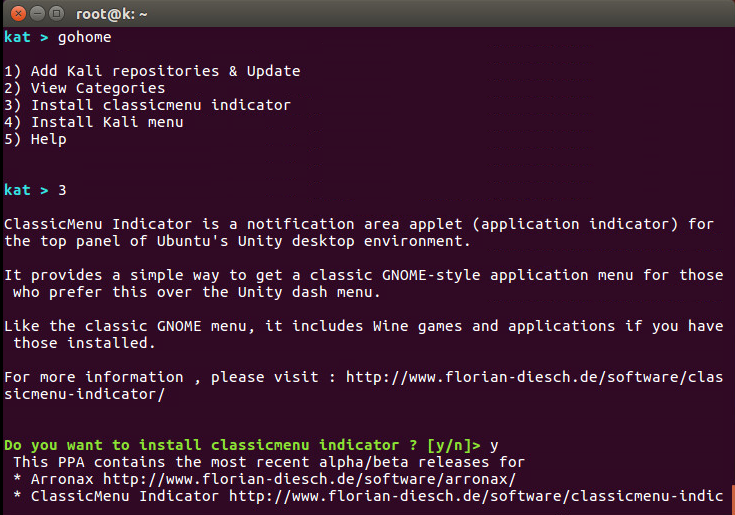 Once you are done with installation of Kali tools using katoolin, you can quit by sending ‘Ctrl + c’ .

When it comes to forensics, penetration and security testing then you must think of Kali Linux , which is designed for security professionals and packed with more than 300 security testing tools. In this article you have learned about installation of Kali Linux tools by using the Katoolin script on Ubuntu 16 . You can also do the same without using Katoolin script by manually adding the Kali repositories in your source list. But I recommend to use katoolin, which is an amazing python utility that allows you to add repositories and install any tool from Kali Linux distribution. One of the advantages of Katoolin is that you don’t have to install the whole array of tools that come with Kali Linux, as you can select only the tools you want, and still keep your distribution. At the end thank you for reading this article and do share your valuable comments.