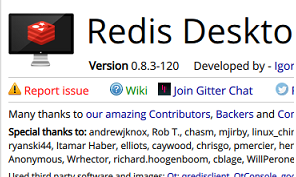 Redis is a high performance data store solution, it is a one more step forward in the “No SQL” regime and developers are using this store to achieve reliable performance and flexibility for their applications. Redis can be used as database, cache and message broker. It supports wide range of data structures and atomic operations. It uses an “in-memory dataset” for achieving optimized performance. Redis works on Linux and Mac operating systems; for production environments, it is recommended to use Redis on Linux OS. Redis supports a large number of programming languages and currently efforts are being made to make this available for Windows operating system too. In this article, we will learn how to install Redis on Ubuntu Linux and how to manage Redis using Redis Desktop Manager tool.

Redis is a simple and lightweight tool, in order to install it ubuntu, you don’t need any special packages/ pre-requisites, just make sure to run APT updates first.

Once the update process is complete, run following command to install Redis; confirm the download for installer package when prompted. 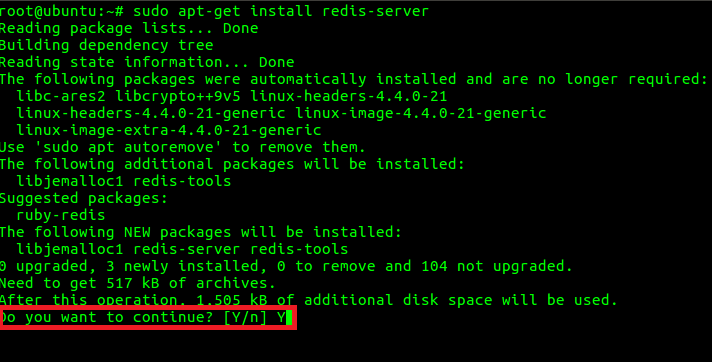 That’s it, Redis has been installed, now we need to start its daemon process. Run following command to start Redis server process.

You can optimize “redis-server /etc/redis/redis.conf” configuration file to tweak / modify Redis to your needs. This configuration files contains various parameters, for production environment, it is recommend to properly adjust this file so that Redis may server you to its best capabilities.

Once Redis process has been started, you can verify that its running fine by accessing its command line console using following command.

It should take you to the Redis prompt, following screenshot depicts this.

Redis is running fine on our Linux box now, we will install and configure its Desktop manager application so we may use a nice, easy to use graphical interface to interact with Redis.

If you see any dependencies errors while running above, simply run following APT command.

Congratulations! Redis Desktop Manager has been installed now, launch it by simply typing.

Here is the welcome screen you should be seeing. 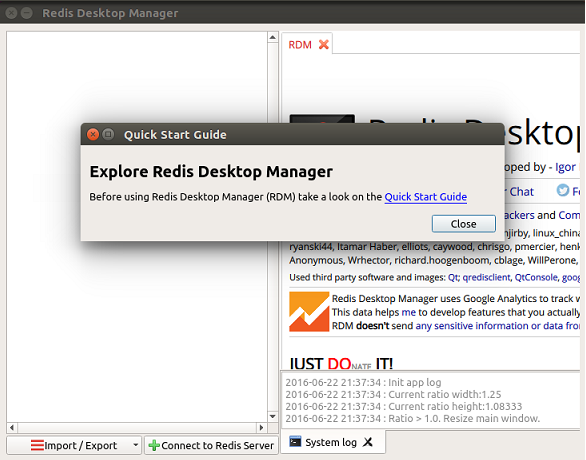 In order to connect your localhost or remote Redis server, click “Connect to Redis Server” tab and it will load a login window, here specify your Redis server details. 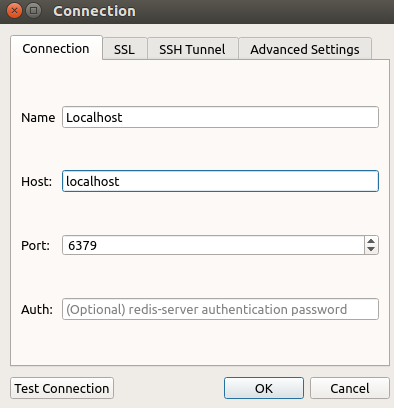 There you go, you are connected to your Redis instance now, start using it for your required operations. 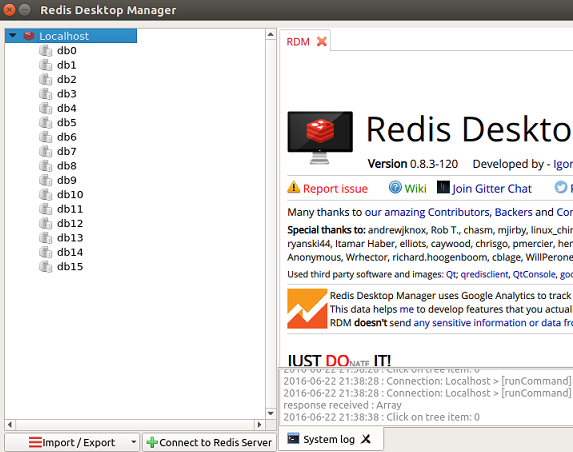 Redis is being used by many experts for their production and critical applications. The popularity for this tool is on the rise and we should see more and more features in the coming era. No-SQL techniques have gained massive popularity due to their speed, easy of use and flexibility.

If you enjoy our article(s), Please use “Get Linuxpitstop articles by Email” option to get latest articles by email. Please like, follow and share our social network pages, we need help from esteemed visitors like yourself to keep this venture going.

4 thoughts on “How To Install Redis And Redis Desktop Manager On Ubuntu Linux 16.04”