Open Broadcaster Software (OBS) is free, open source, cross platform video recording and live streaming software. It’s absolutely free , feature rich application. It started as a small project but got popularity due to its stability and easy of use. Today, it is considered an essential component of computer system if you like to record or stream videos on your workstation. We will be reviewing its prominent features and installation process on Ubuntu Linux 15.04 today.

Here are important feature of this freeware:

Lets see how we can install this beautiful piece of software to our ubuntu system. This tool has only one dependency i.e. FFMPEG. In order to proceed with OBS installation, please make sure you have ffmpeg installed on your ubuntu system.

As soon as its installation is complete, launch it from Applications >> OBS .

It will ask you to accept License Agreement for once; do it to start using this awesome app  🙂 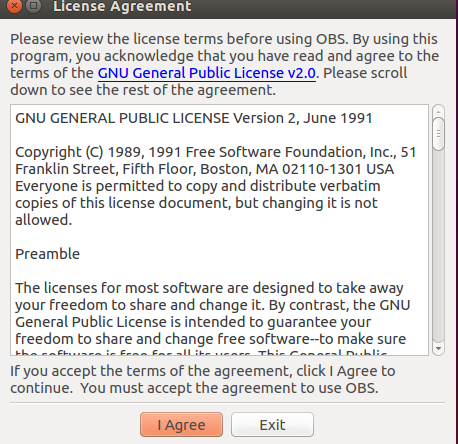 The prominent features and easy of use have made this tool a popular one. It runs fine on Linux, Microsoft Windows and Mac OS. It has good online help available for newbie and learners.